You're Home! » Disney’s Alice Through the Looking Glass 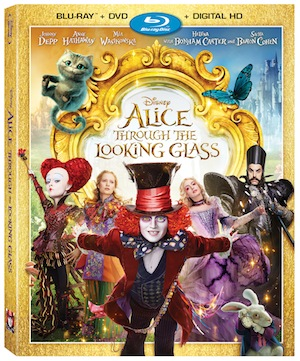 I still enjoy that movie and always will. My kids like watching it too. Now though, there are newer movies and versions of Alice and Wonderland. They are quite different, I must say! But, anything with Johnny Depp is a bit different 😉 He likes to play those ‘out there’ roles!

We received Disney’s Alice Through The Looking Glass and my goodness, this is some movie. So action packed and holds your attention until the end. With all the weird creatures and storyline, you would be crazy to not be interested in this movie.

About Alice Through the Looking Glass

Disney presents the spectacular live adventure Alice Through the Looking Glass. The all-star cast from the 2010 blockbuster is back with Johnny Depp as the Mad Hatter who’s desperately searching for his family; Anne Hathaway as Mirana, the kind, mild-mannered White Queen; Helena Bonham Carter as Iracebeth, the short-tempered, big-headed Red Queen; and Mia Wasikowska as Alice, the heroine at the heart of the story.

Sacha Baron Cohen joins the ensemble as Time, a magical being that is part human, part clock, and the late Alan Rickman—to whom the film is dedicated—is the voice of Absolem, the blue Monarch butterfly who metamorphosed from the blue caterpillar “Alice in Wonderland.” Bring the journey home October 18th on Digital HD, Blu-ray™ and Disney Movies Anywhere.

Disney’s “Alice Through the Looking Glass” is a spectacular adventure, featuring the unforgettable characters from Lewis Carroll’s beloved stories, in which Alice returns to the whimsical world of Underland and travels back in time to save the Mad Hatter. Directed by James Bobin, who brings his own unique vision to the visually-stunning world Tim Burton created on screen with “Alice in Wonderland,” the film is written by Linda Woolverton and based on characters created by Lewis Carroll. The producers are Joe Roth, Suzanne Todd, p.g.a. and Jennifer Todd, p.g.a. and Tim Burton. John G. Scotti serves as executive producer.

You can purchase Alice Through The Looking Glass online at Amazon.com. It retails for $22.99.

One person is going to win Alice Through The Looking Glass on Blu-ray DVD and one person will win a DMA code! Yay!

Contest is open to US, 18+. Giveaway will end on November 9, 2016 at 11:59 PM MT. Winner will have 48 hours to confirm their win, after I email them, or a new winner will be chosen. I am not responsible for lost or stolen mail.