You're Home! » The BoxTrolls Review 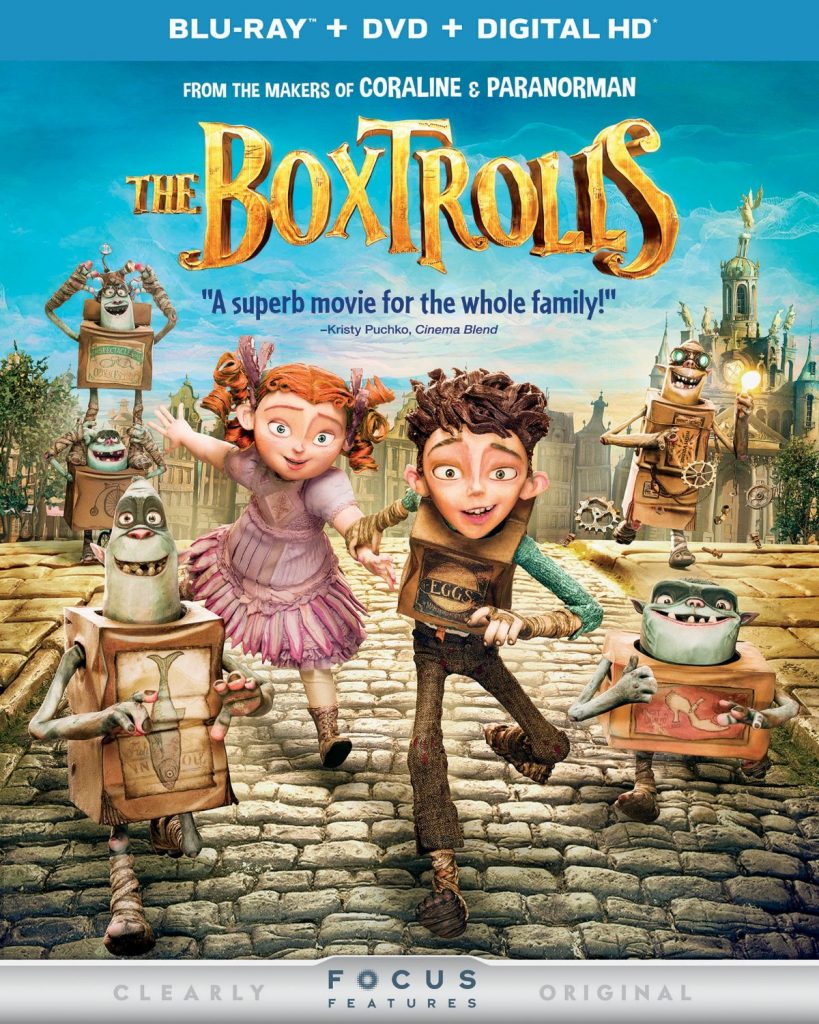 Okay, I will have to say that The Boxtrolls

is absolutely the cutest movie I have seen, in a long time. I love it, my kids adore it and it is ALWAYS playing in our home! This great film has been nominated for 13 Annie Awards, so you KNOW it is pretty dang good!

We loved the movie Coraline and the movie ParaNorman and BoxTrolls is from the same creators. These kinds of movies I have always liked.

When we have movie nights (usually Friday or Saturday nights), my kids will request this movie, 8 times out of 10. They really like it!

What Is BoxTrolls About??

Quirky, mischievous and good-hearted, the Boxtrolls are unique creatures who have lovingly raised a human boy named Eggs in a fantastical charming cavern below the bustling streets of Cheesebridge. But when the evil Archibald Snatcher schemes to capture Eggs’ family, it’s up to Eggs and his feisty new friend Winnie to save the Boxtrolls!

• DARE TO BE SQUARE:  BEHIND THE SCENES OF THE BOXTROLLS

The tremendously talented cast members of The Boxtrolls discuss what it’s like to voice an animated puppet, what each actor brought to his/her role, whether their personalities were similar to their characters, and more.

o INSIDE THE BOX

The directors, producers, and creative supervisor of character fabrication Georgina Hayns share the challenges of crafting characters who are inside a box.

The directors and producers are joined by Brian McLean, director of Rapid Prototyping, to discuss how the animation studio LAIKA creates the faces for their puppets.   The big story here – literally! – is how Snatcher’s face changes shape due to his cheese allergy.

Discover how LAIKA combined traditional stop-motion animation with visual effects in order to create the beautiful ballroom dance sequence – and  how costume designer Deborah Cook met the challenge of creating costumes that could flow during a dance scene.

Standing 5 feet tall and weighing over 75 pounds, the Mecha-Drill is the largest stop motion puppet/prop ever created by LAIKA.  Follow its creation from design to completion.

o THE NATURE OF CREATION

o TROLLS RIGHT OFF THE TONGUE

o ON THE SHOULDERS OF GIANTS

You can now purchase BoxTrolls on Blu-ray and DVD online at Amazon.com

One person is going to win The BoxTrolls on Blu-ray and DVD!

Easy! Just use the Rafflecopter form below! Good luck to you!

Contest is open to US 18+. Giveaway will end on February 20, 2015 at 12 am PST. Winner will have 48 hours to confirm their win, after I email them, or a new winner will be chosen. Sponsor is responsible for sending out prizes. I am not responsible for lost or stolen mail.