You're Home! » Check Out The Fantasy Adventure Film: The BFG!

Did you check out the fantasy adventure film: The BFG? If not, you absolutely should! We received this to review and check out yesterday. We watched it last night and oh my goodness, we LOVE this movie! Two thumbs up from my family! 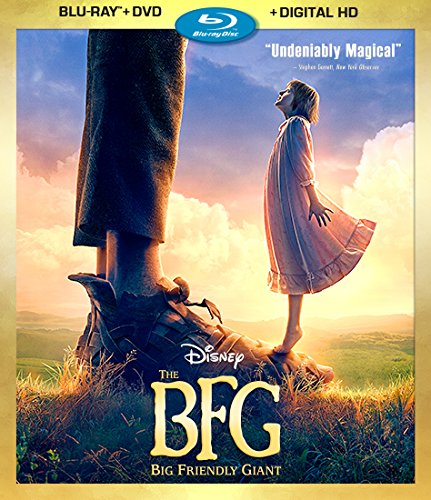 Disney and Amblin Entertainment, in association with Walden Media, present the fantasy adventure film “The BFG,” the first-ever motion picture adaptation of Roald Dahl’s resonant tale of childhood, the magic of dreams and the extraordinary friendship between a young girl and a big friendly giant.

Directed by three-time Academy Award® winner Steven Spielberg, the film reunites the director with his Oscar®-nominated collaborator on “E.T. the Extra-Terrestrial,” Melissa Mathison, who adapted the children’s author’s timeless adventure for the big screen.

This magical tale of an extraordinary friendship loaded with exciting extras will brighten the holidays for the whole family! “The BFG” comes to Digital HD, Blu-ray™ and Disney Movies Anywhere November 29 (today!!!). Go grab your copy on Amazon.com today! Yay!

This magical tale of an extraordinary friendship loaded with exciting extras will brighten the holidays for the whole family!

The Big Friendly Giant and Me – Sophie wasn’t the first “bean” in Giant Country—many illustrations were created as if drawn by a little boy who was there long before Sophie. This charming, in-world short will bring the drawings to life with animation and narration, recounting the friendship and the dreams shared between the boy and the Big Friendly Giant.

Gobblefunk: The Wonderful Words of The BFG – A whoopsey-splunkers tutorial on the meaning of the gloriumptious gobblefunk in “The BFG.”

Giants 101 – Jemaine Clement (Fleshlumpeater) and Bill Hader (Bloodbottler) introduce us to the loathsome giants in “The BFG,” along with movement choreographer/motion capture performer Terry Notary, who collaborated with the actors and Director Steven Spielberg prior to filming to develop their movements and character traits.

Melissa Mathison: A Tribute – An homage to Melissa Mathison, the extraordinary, Oscar®-nominated screenwriter of “The BFG” and “E.T.,” whose talent and heart were as immense as the giants in “The BFG.”

John Williams: Scoring A Dream – A journey through the film’s concept art and memorable moments, interwoven with the sights and sounds of legendary composer John William’s scoring session.

Gobblefunk: The Wonderful Words of The BFG and Melissa Mathison: A Tribute

You can purchase The BFG on Amazon.com. It retails for around $22.99.