You're Home! » The Lion King Roars To Its Rightful Place In The Walt Disney Signature Collection On Blu-ray

The Lion King Roars To Its Rightful Place In The Walt Disney Signature Collection On Blu-ray! We were so excited and you should be too! Product received. Opinions are my own. This post includes my affiliate links.

Have you seen The Lion King? I am sure you have, but if you haven’t then you need to! Now is a perfect time to! Why? Because The Lion King Roars To Its Rightful Place In The Walt Disney Signature Collection On Blu-ray on August 29th!! Yay! 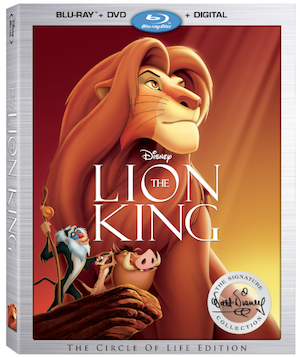 My oldest son absolutely loves The Lion King. It has been his favorite Disney Movie since he was little. So when he heard about it coming out in the Walt Disney Signature Collection on Blu-ray he was so excited! We were happy to have received the DVD to review! Since receiving the DVD, we have watched this 3 times so far! We adore this sweet Disney movie!

In honor of The Lion King, I have some super fun printables and activities for you, below! Just click on the images and have fun! My kids are loving them and yours will too!

One of the biggest animated films in history, The Lion King, the coming-of-age masterpiece, is filled with humor and heart, breathtaking animation and soul-stirring Academy Award®–winning music (1994: Best Original Score and Best Original Song, “Can You Feel the Love Tonight”). It is such an awesome Disney movie!

You will fall in love all over again with the treasured classic, and a new generation of fans will laugh with Timon and Pumbaa, cry with Simba and Mufasa, burst into song, and find their place in the “Circle of Life.” The Walt Disney Signature Collection release includes over three hours of classic bonus material and exclusive, brand new features inviting viewers to sing along with the film’s award-winning music, observe recording sessions, step inside the story room, witness the evolution of a villain, and join Nathan Lane (voice of Timon) and Matthew Broderick (voice of Adult Simba) for an extended conversation regarding the legacy of “The Lion King.”

“The Lion King” is the fifth title to join the Walt Disney Signature Collection, which includes groundbreaking films created or inspired by the imagination and legacy of Walt Disney, featuring timeless stories and characters that have touched generations. It takes its place alongside “Snow White and the Seven Dwarfs,” “Beauty and the Beast,” “Pinocchio” and “Bambi.”

3.      Visualizing a Villain – Against a backdrop of live dancers and the animated “Be Prepared” sequence, artist David Garibaldi paints a masterpiece of evil.

4.      The Recording Sessions – Watch rare footage of the actors recording their roles, matched with the final animation. Intro by Roger Allers and Rob Minkoff.

1.      Circle of Life – See how color creates emotion and meaning in the film’s iconic opening.

3.      Simba Takes Nala Out to Play – …And, sometimes what seems funny in story meetings never makes it into the film!

4.      Hakuna Matata – Co-directors Roger Allers and Rob Minkoff sing, act and dance their hearts out as they pitch the “Hakuna Matata” sequence.

1.      Visual Development – Explore a gallery of striking artwork that inspired the movie’s look and feel.

3.      Storyboards – Examine storyboards created in the development of “The Lion King.”

4.      Layouts – Feast your eyes on layouts created in the development of “The Lion King.”

5.      Backgrounds & Layouts – Journey through a gallery of landscape paintings that shaped the world of “The Lion King.”

9.      Classic Bonus Features (Digital Only) – These offerings from prior home entertainment releases include hours of bonus material, such as bloopers, audio commentary, deleted and alternate scenes, and in-depth journeys into the music, film, story, animals and stage show.

You can purchase The Lion King online at http://movies.disney.com/The-Lion-King.

The Lion King Roars To Its Rightful Place In The Walt Disney Signature Collection On Blu-ray August 29th! Are you Excited?! Will You Be Buying A Copy?