You're Home! » How My Daughter Learned to Play Piano on a Smartphone App

As many moms know, it’s vitally important to introduce your children early to the arts and the joys of artistic expression. A great number of research projects conducted worldwide have reinforced the importance of early childhood education in reading, painting, and music. Research projects show how arts education at school, as well as activity at home, improves the aesthetic development of young people. A cross-cultural study of pre–schoolers— a total of 215 pre-kindergarteners and 228 kindergarteners, which was conducted in Tel Aviv and in Ohio, is just one of the studies that confirm the value of arts education instruction.

This is why I try to teach my own children the value of artistic expression and why I started doing so from very early on in their development.As an early childhood educator, I am acutely aware that activities in the spheres of art, music, and dance enhance children’s self-confidence, feelings of self-awareness, as well as acceptance of others. A study implemented at two inner-city elementary schools in New Jersey offered the “Arts Alternatives Program” option to students in grade four, five, and six who came from families with low socioeconomic status.

Researchers measured attitudinal changes in students by using an attitude scale. Through a variety of role-playing and story writing activities, students showed better attitudes that included heightened self-acceptance, self-expression, trust, self-awareness, acceptance of others, and empowerment. 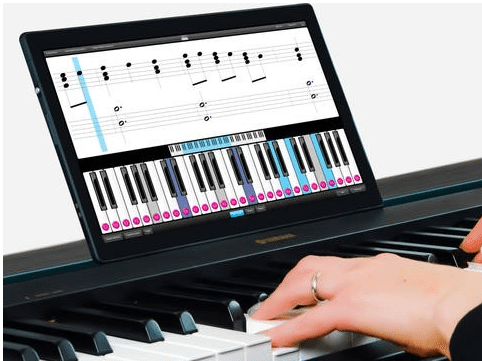 This is why I enrolled my daughter in a finger painting class, a children’s story-time group, and encouraged her to perform in the kindergarten thanksgiving play at her school. But as she’s growing into her pre-teen years, she has decided that she’d like to learn to play the piano. I had no objections, as my husband and I often fill the house on Saturday afternoons with concertos and sonatas by Beethoven, Chopin, and other classical composers. But when I looked into the cost of professional piano lessons, I was flabbergasted. Some instructors were charging as much as 200 dollars per hour. Yikes!

Then, a friend of mine turned me on to Singspiel. Singspiel, an app for your smartphone that teaches your children how to play the piano — for free! I downloaded the app onto my iPhone, and soon enough my daughter and I were hard at work, and she was learning the basics of the discipline. There was only one hitch. The app, along with many others like it, requires hours of practice, and due to my busy schedule, I couldn’t always be there with my expensive iPhone to lend to my daughter to practice on. I needed to find a smartphone but didn’t want to spend too much on it, since I only needed it for basic music apps.

“Honey,” I said to my husband, “I think our daughter needs a smartphone.”

He nearly keeled over with laughter. “That’ll be the day,” he said through fits of laughter.

Neither of us is keen on cell phone use among young children, but, as I reminded him, it concerned our daughter’s education. The whole issue went on the backburner until the following weekend, when our family went to visit my husband’s parents in Windsor, Canada. While cooking us a number of savory meals throughout the weekend using a recipe app, she confided that she’d bought her Galaxy smartphone online for next to nothing.

She’d visited Kijiji, a Canadian classified site, and that she’d used their mobile device price checker to determine the average price of all Samsung phones on the entire site. This allowed her to snag one on the cheap when she noticed the price drop. On our last night, she showed me the site, and before long, I’d snagged a smartphone for my daughter for less than the cost of one single hour of piano lessons. And they even delivered if for a nominal fee back to the States.

That was six months ago, and now my daughter is playing her first recital, all through the magical collision of technology and education. She’s more self-confident, more expressive, and she loves her new passion — of course, we still don’t let her take the smartphone out of the house!