Oh, my word. We just received Toy Story 4 in the mail today and we are all very excited to watch it tonight! I have heard SO many great things about this family-friendly movie! I also have a super fun Toy Story 4 Car Ride Bingo Game free printable for you, below as well as a fun giveaway for the new Toy Story 4! Yay! So many fun goodies in one blog post!

Packed with old friends and new faces, the fourth film in the beloved Toy Story series, which leads Woody to an unexpected fork in the road, arrives home on Digital in 4K Ultra HD™, HD, and Movies Anywhere Oct. 1, and on 4K Ultra HD™, Blu-ray,™ DVD Oct. 8. 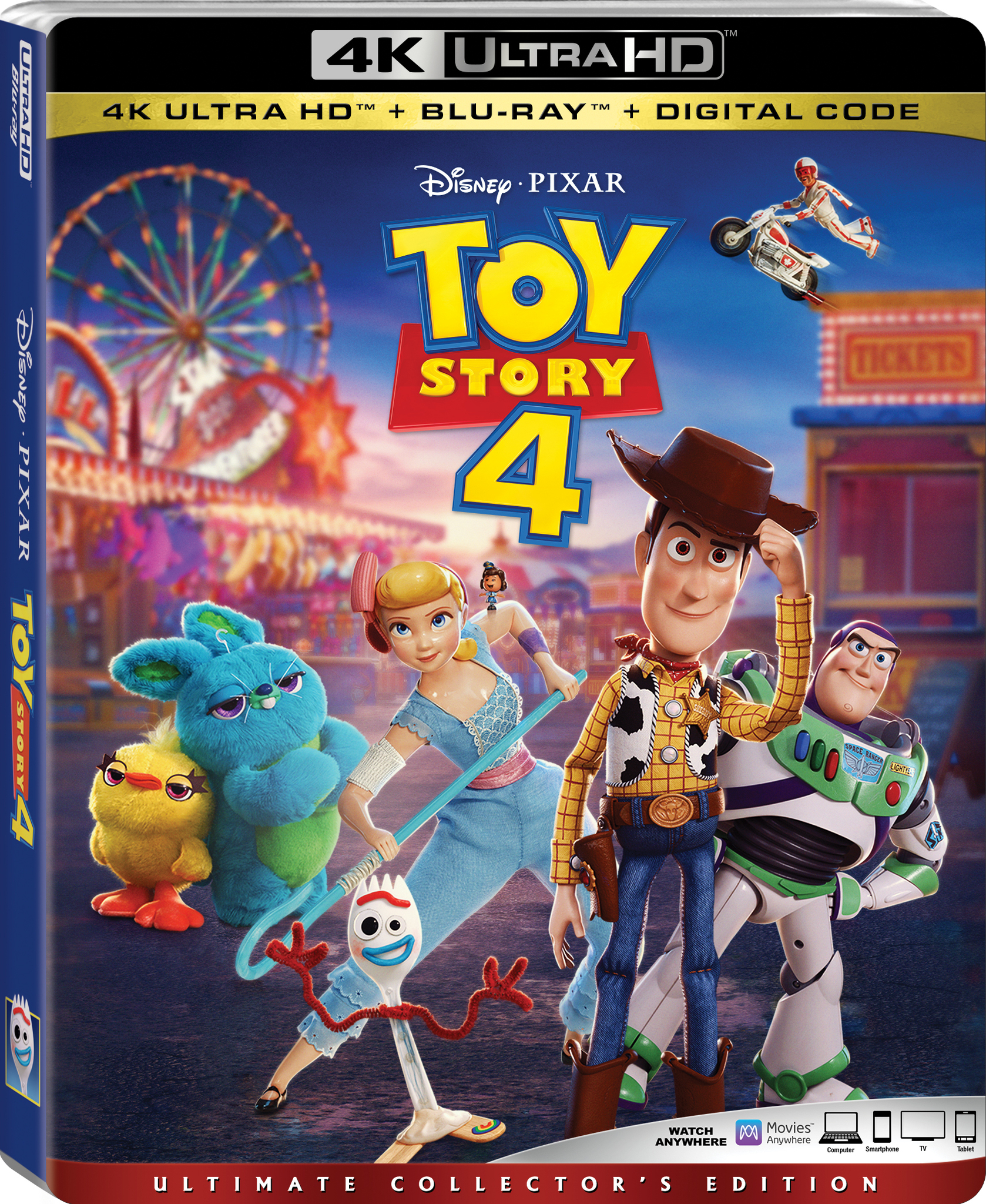 First, A Bit About Toy Story 4!

In “Toy Story 4,” Woody (voice of Tom Hanks) has always been confident about his place in the world, and that his priority is taking care of his kid, whether that’s Andy or Bonnie. So, when Bonnie’s beloved new craft-project-turned-toy Forky (voice of Tony Hale) calls himself “trash,” Woody decides to teach Forky how to embrace being a toy.

But a road-trip adventure, including an unexpected reunion with his long-lost friend Bo Peep (voice of Annie Potts), shows Woody how big the world can be for a toy. In addition, carnival prizes. Ducky (voice of Keegan-Michael Key)and Bunny (voice of Jordan Peele) bring a new level of fun to the film. 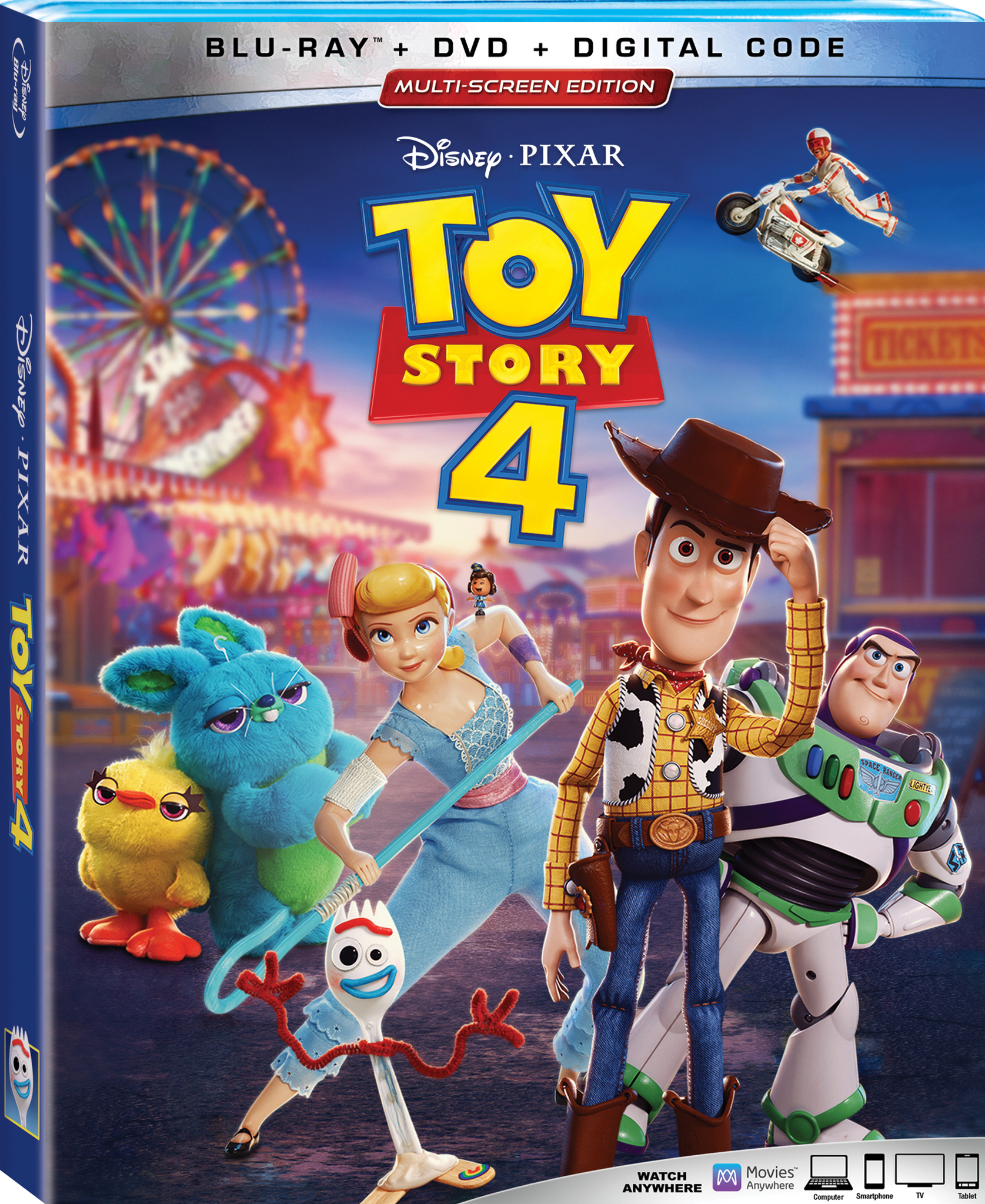 Fans who bring home “Toy Story 4” will be treated to over an hour of bonus features celebrating the film’s iconic characters, Pixar’s filmmaking team and the legacy of “Toy Story,” which began as the worlds first fully computer-animated feature film released nearly 25 years ago.

Extensive extras includes deleted scenes such as an alternate ending, an all-new featurette with an endearing look back on Woody and Buzz’s legendary friendship throughout the years; entertaining studio stories shared by members of the Pixar team; a nostalgic look back at the creation and first storyboard screening of “Toy Story” with filmmakers; and the pioneering efforts of Pixar artists who created the sets, characters, look and feel of the original film and much more.

Just click this link OR the image below, to download your own Toy Story 4 Car Ride Bingo Game Free Printable! Now long car rides don’t have to be so boring! Play a fun, Bingo game with the family! 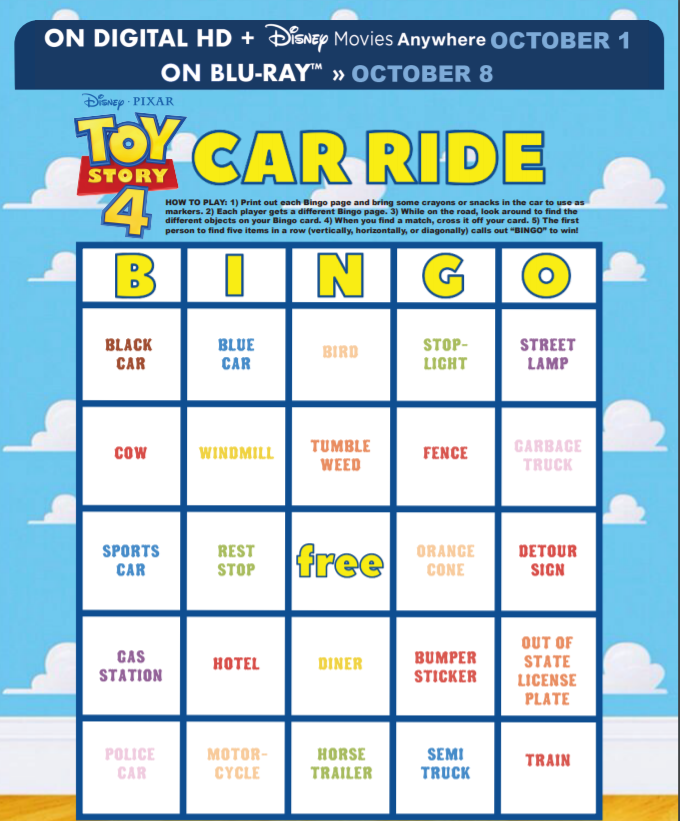 Grab a copy of Toy Story 4 on Movies Anywhere and Amazon.com!

The contest is open to US 18+. Giveaway will end on October 18, 2019, at 11:59 PM MT. Winner will have 48 hours to confirm their win after I email them, or a new winner will be chosen. I am not responsible for lost or stolen mail.