I have to agree, sometimes the things you cannot see in your home can certainly be the most dangerous! How do you detect such things? How do you keep your home and family safe? What is the Best Carbon Monoxide Alarm?

Good questions. But, one of the most dangerous things you cannot see in your home is Carbon Monoxide. It is so scary and can be deadly within MINUTES.

My husband knew of three men who all went out four-wheeling. They NEVER came back. Their friends went out to go looking for them and found ALL three of them, dead in their truck. Why? Because they had fumes coming into their truck and they all passed out and died. SCARY. All three of them! Can you imagine? 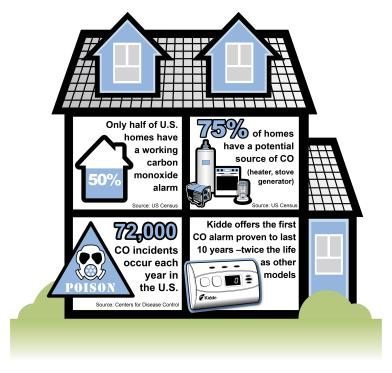 Yes, that was a story about people in a vehicle, but your home can have situations like this too! Carbon Monoxide (CO) is colorless, odorless and tasteless and is the leading cause of unintentional poisoning deaths in the U.S.!

There is a safe way to test it though and that is with a CO alarm.  According to the U.S. Census, while 75% of all homes have a potential source of carbon monoxide, like a water heater, fireplace, furnace, generator or any other fuel-burning appliances, only half of U.S. homes have a working carbon monoxide alarm! Seems to me like more homes should have these CO alarms.

This alarm is the first and only UL-listed CO alarm proven to provide up to 10 years of protection! So you can feel confident knowing your family is protected from CO.

This alarm also contains a sealed-in lithium battery that powers the alarm for a decade, eliminating annoying low-battery chirps while helping to keep your loved ones safe. I really like that about Kidde alarms!

I know I know, that horrible squeaky door wakes up the household when you go to the bathroom at night. Or that floorboard under your carpet creaks sooooo loud it makes you cringe!

Do you have home annoyances like the ones I just talked about? I have a door that drives me insane and my bed creaks when I get in and out of it, making my hubby stir during the night because I have to get up and use the bathroom soooo many times throughout the night! The joys of pregnancy!

That certain home annoyance is the chirping sound of your smoke alarms, means the battery is low, dying or dead. Whenever we hear this noise, it is quickly fixed by simply putting in new batteries. Take only a minute of your time and could end up saving your lives. Now that is something to fix asap, right? After all, your family is important, right???

A recent survey of more than 1,000 owners of homes ten years or older reveals that while aggravated by sounds such as smoke alarm low-battery chirps, homeowners are not acting when warned of low battery power, even though statistics show they should be!! Can you believe that?! My mouth dropped when I read this!

Here Are Some Survey Results I Found VERY Interesting:

A Familiar (and annoying) Sound…Especially at Night
• Nearly nine out of 10 homeowners (87%) have heard their smoke alarm low-battery chirp.
• Of those who have heard the sound, 43 percent report hearing the sound during the middle of the night.
• When compared to other fixable disturbances like clanking pipes, dripping faucets or a cell phone ringing, homeowners consider a middle-of-the-night low battery chirp or nuisance alarm more annoying.
Not Aggravated Enough to Act
• 53 percent of homeowners deem a smoke alarm low-battery chirp annoying, but one in three homeowners (33%) say that if they heard the chirp, they would not be extremely likely to replace the battery within 24 hours.
• Seven percent of homeowners confess that they’d be more likely to disconnect the alarm than install a new battery.
Cooking Up Concern
• Nearly eight in ten (78%) believe that a fire would be most likely in their kitchens than anywhere else in the home. And homeowners are right. Kitchens are the leading area of origin for home structure fires and civilian home fire injuries.*

Alarming Knowledge Gaps
A startling amount of homeowners are missing key knowledge about the basics of fire protection:
• Nearly three-quarters (74%) cannot correctly describe where smoke alarms must be placed in the home.
• Close to three in five (58%) cannot correctly answer those batteries should be changed every six months, and 68 percent believe that this action should be taken less often
• Forty-three percent admit that they do not know how often to replace smoke alarms.
• One in four homeowners confesses to never replacing their home’s smoke alarms.

One way we all can get this under control is by replacing batteries in a timely manner. You can also go out and purchase the newly debuted Kidde Worry-Free Smoke Alarms.

These alarms are powered by sealed, long-life lithium batteries for 10 years (the life of the alarm), meaning they are always on. Each of the four alarms (see them below), includes features designed to address location-specific safety needs such as a light in the hallway for egress and innovative smart sensing technology for kitchens to minimize nuisance alarms caused by cooking (have ALWAYS hated that!!). 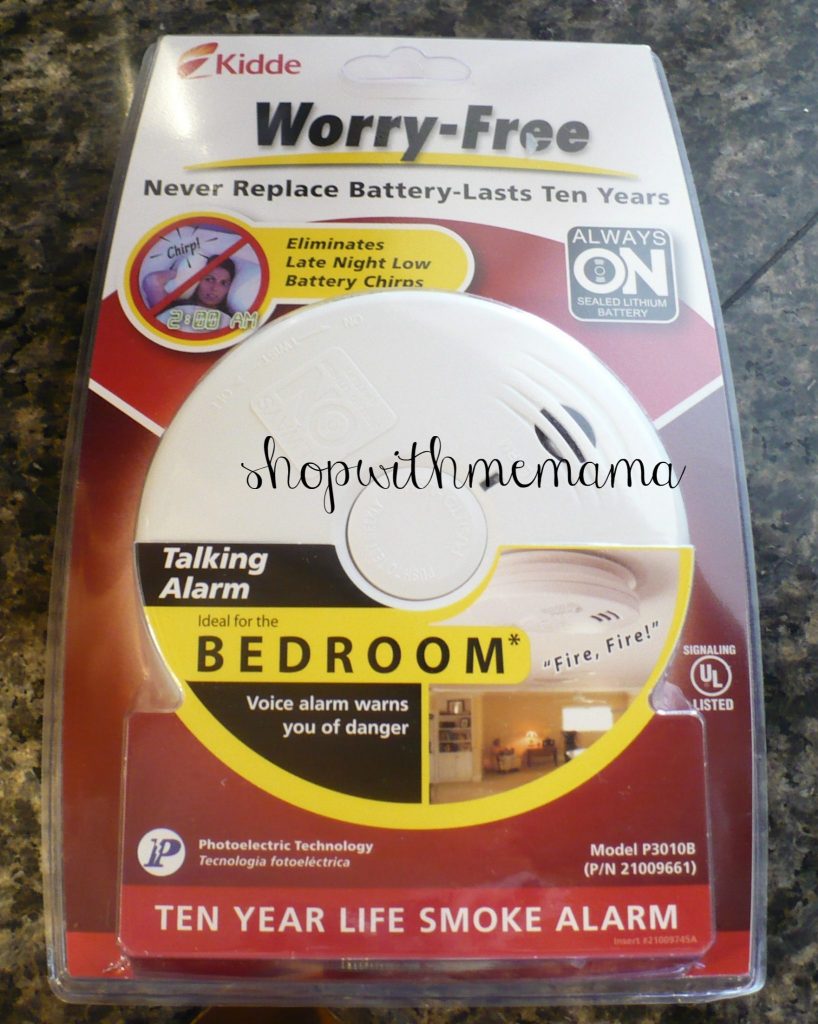 These wonderful and helpful smoke alarms have a suggested retail prices range from $25 to $50. Very much worth every penny if you ask me.

I received the Kidde Worry-Free Bedroom Smoke Alarm and we took down the older one we had and put up this one, in the kids’ room. I feel more confident now that we have this installed in their room.

You can buy the Kidde Worry-Free Carbon Monoxide Alarm on Amazon.com.