You're Home! » Disney’s Beauty and the Beast Summer Reading Program!

Guess what?! Disney’s Beauty and The Beast is OUT on Digital HD, Blu-ray, Disney Movies Anywhere, DVD, and On-Demand, TODAY!! Yay! Have you seen it yet? It is GOOD.

We received this awesome movie to check out. We had a fabulous family movie night the other night and we had a blast. This movie is truly a keeper. And, Disney’s Beauty and the Beast Summer Reading Program here! Talk about a FUN summer this will be!

But first, let us chat about this movie! I am sure you heard many, many people talking about this movie. Every friend I know, that went to see this movie in the theater, CRIED. I did not think I would, but guess what? I did too..

The Making Of Beauty And The Beast

Disney’s Beauty and the Beast, the live-action adaptation of the studio’s animated classic, brought the story and characters audiences know and love to spectacular life and broke box-office records. The release invites viewers to get up close and personal with the filmmakers and cast to see how this beloved animated film was transformed into a new live-action classic, from the first enchanted table read to a fascinating look at how the film was brought to life utilizing lavish sets, elaborately designed costumes and props, and state-of the-art technology. 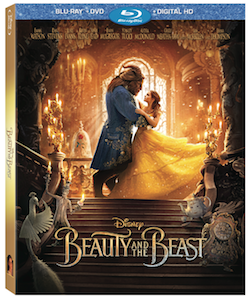 A feature on the amazing women behind the enchanted tale hosted by Emma Watson; and over 10 minutes of deleted scenes along with musical extras, including the “Beauty and the Beast” music video starring Ariana Grande and John Legend, Celine Dion’s heartfelt take on the new song “How Does a Moment Last Forever,” and jump directly to all you favorite unforgettable songs. Bring home the timeless tale beloved by generations.

Enchanted Table Read – Join the cast for the movie’s elaborately staged table read, complete with singing and dancing to live music, set pieces and more.
A Beauty of a Tale – Explore the process of transforming a beloved animated film into a new live-action classic.
The Women Behind “Beauty and the Beast” – Emma Watson introduces several of the talented women in all aspects of production who helped bring this enchanted tale to life.
Making a Moment with Celine Dion – Celine Dion shares what it’s like to sing “How Does a Moment Last Forever” – and be a part of the legacy of “Beauty and the Beast.”
From Song to Screen: Making the Musical Sequences – See what goes into making some of the best-known moments from “Beauty and the Beast.”
“Belle” — Filmmakers and cast reveal how it felt to shoot this memorable scene.
“Be Our Guest” — Discover all that went into creating this epic, primarily virtual performance.
“Gaston” — Join the cast for rehearsals and filming of this rousing, high-energy number.
“Beauty and the Beast” — You’re invited on set for the filming of this beloved, classic scene.

Introduction by Director Bill Condon — Director Bill Condon presents a collection of scenes that, for one reason or another, ended up on the cutting-room floor.
Gaston Courts Belle — Pleased with himself after settling a disturbance with the townspeople, a triumphant Gaston attempts to woo Belle.
Bread and Jam for Agathe — On her morning market rounds, Belle stops by to see Agathe, the village beggar woman.
Storming the Ice Gates — The angry mob of villagers, led by Gaston, overwhelms the castle’s defenses.
Lumière Torches LeFou — As the fight rages around them, LeFou scuffles with Plumette … until he experiences a sudden, extremely heated interruption.
Monsieur Toilette — LeFou escapes from the brawl into a small room, where he’s startled by a castle resident.
Cogsworth Rescues Lumière — When Clothilde the fishmonger threatens Lumière, Cogsworth leaps into the fray.
Treacle the Lasses — Three village lasses chase Chip and Froufrou – Madame Garderobe’s dog-turned-footstool – into the kitchen, where a surprise awaits.
LeFou and Monsieur Toilette Reunite — After the spell is broken and the castle residents are returned to human form, LeFou and his new acquaintance meet again.
Extended Song: “Days in the Sun” – Learn more about Beast’s childhood in an alternate version of this beautiful song, introduced by director Bill Condon.
“Beauty and the Beast” Music Video – Award-winning artists Ariana Grande and John Legend perform a moving version of this iconic song.
Making the Music Video – Go on set to capture the magic as it happens in Ariana Grande and John Legend’s “Beauty and the Beast” music video.
Disney Song Selection – Jump directly to all your favorite songs and sing along with the movie.
“Belle”
“How Does a Moment Last Forever” (Music Box)
“Belle” (Reprise)
“Gaston”
“Be Our Guest”
“Days in the Sun”
“Something There”
“How Does a Moment Last Forever” (Montmartre)
“Beauty and the Beast”
“Evermore”
“The Mob Sing”
“Beauty and the Beast” (Finale)

“Beauty and the Beast” Music Video

“Beauty and the Beast” features an extraordinary ensemble cast, including Emma Watson as Belle, Dan Stevens as The Beast, Luke Evans as Gaston, Kevin Kline as Maurice, Josh Gad as LeFou, Ewan McGregor as Lumière, Stanley Tucci as Maestro Cadenza, Audra McDonald as Madame de Garderobe, Gugu Mbatha-Raw as Plumette, Hattie Morahan as the enchantress and Nathan Mack as Chip with Ian McKellen as Cogsworth and Emma Thompson as Mrs. Potts.

Directed by Bill Condon and based on the 1991 animated film “Beauty and the Beast,” the screenplay is written by Stephen Chbosky and Evan Spiliotopoulos. Alan Menken provides the score, which includes new recordings of the original songs written by Menken and Howard Ashman as well as three new songs written by Menken and Tim Rice. The film is produced by Mandeville Films’ David Hoberman, p.g.a. and Todd Lieberman, p.g.a with Jeffrey Silver, Thomas Schumacher and Don Hahn serving as executive producers.

And now, just like Belle loves to read, you can encourage your kids to read this summer with a special BEAUTY AND THE BEAST sponsored reading program with prizes!

Win prizes this summer by joining the 2017 Disney’s Beauty and the Beast Summer Reading Program! Just visit www.dogobooks.com online between May 26th to September 15th, 2017.

2.Select books to read from a Reading List of 45 books

3.Read books and write reviews of 30 words or more

You can purchase Beauty And The Beast online at Amazon.com!