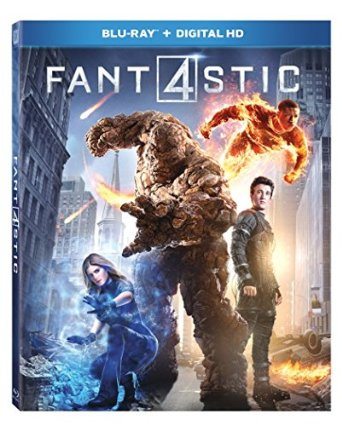 We received this movie the other day and though I have yet to see it, my kids and their friends sure enjoyed it! Such an action-packed movie and entertained those kids throughout the whole movie! Nice break for me 🙂

The FANTASTIC FOUR make a triumphant return with MARVEL’s next generation of heroes — four young outsiders who teleport to an alternate universe, their physical forms altered in shocking ways. Their lives changed forever, Reed Richards (“MR. FANTASTIC”), Sue Storm (“INVISIBLE WOMAN”), Johnny Storm (“THE HUMAN TORCH”) and Ben Grimm (“THE THING”) must harness their incredible new powers and work together to save Earth from a former friend turned enemy, the infamous DR. DOOM.

You can purchase Fantastic 4 on Amazon.com!

One person is going to win Fantastic 4 on Blu-ray! Yay!

Contest is open to US 18+. Giveaway will end on January 2, 2016 at 11:59 PM PST. Winner will have 48 hours to confirm their win, after I email them, or a new winner will be chosen. I am not responsible for lost or stolen mail.